Devices in the library: trends and opportunities

Availability of Wi-Fi in your local library is now generally expected, with a robust service taken as a given. But what does this mean for consumption of services in the library? While libraries are reporting greater prevalence of BYOD (Bring Your Own Device), this often isn’t impacting library PC usage, indicating that libraries are attracting a wider audience with a better range of services. Only a small number of libraries report a decrease in PC session demand as a result of BYOD.

The BYOD trend is set to continue with the £2.6m Wi-Fi funding distribution from Arts Council England in 2015, following the Sieghart Report recommendation that all libraries in England provide free Wi-Fi. The programme has now concluded with 99% of public libraries in England providing this. Meanwhile in Scotland, further Wi-Fi funding was announced last August as part of the public wireless programme.

However, Wi-Fi filtering remains an issue for many libraries. Without identifying each user as belonging to a particular group – typically adults or children – how can the appropriate access be ensured? A single layer of family-friendly filtering tends to frustrate adult users when attempting to access the internet on their devices in the library. Commonly used websites such as Facebook may well be blocked. This becomes a vital consideration when looking at how to broaden library use in the community. Increasingly, we are working with our library netloan customers to facilitate tiered filtering, where authentication to library Wi-Fi from a personal device allows the right filtering level to be applied. This complements the ability to capture useful demographic data on service usage volumes with the netloan Wi-Fi software. Appropriate filtering by user group, usage reporting and also more membership registrations are all important reasons for libraries to use this authentication software for Wi-Fi access.

With progression of the digital offer, the opportunity to use different devices in the library isn’t limited to BYOD. 25% of libraries are providing alternative devices to the standard PC terminal. Tablets with physical anti-theft security are being provided to users, often in softly furnished areas of libraries. In most cases these are not being used in place of regular public access computer sessions. They are often used to supplement PC provision for a different user experience, facilitate short stay points for accessing the catalogue or provide quick online sessions. Other libraries incorporate their use when facilitating supervised group activities such as for digital inclusion, study support for school children or for staff attending outreach sessions. 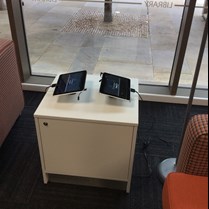 Microsoft Surface Pro tablets in the library with security.

iPads are the most popular choice, followed by Android tablets, although unsurprisingly libraries are concerned about the physical security of devices and controlling the content on them. Where a Windows OS is important, and there is a need for tablets to remain on the library network, authorities are opting for Microsoft Surface Pro tablets.

With the growth in personal and handheld devices in libraries, authorities have been planning their provision of wireless printing. Printing services remain extremely popular, with library authorities printing anything between 100,000 and 1 million pages for customers each year. This represents a source of income for libraries as well as providing an important public service. Being able to extend the service to users’ personal devices has become a priority for many libraries. The launch of netloan Wi-Fi print provides a service that integrates with other administration workflows for managing PCs, print release and Wi-Fi, making it the first wireless printing facility designed specifically for public libraries.

At the PMLG Conference last October, netloan Wi-Fi print was seen in action during the new Stafford Library tour, with Staffordshire Libraries being the first Lorensbergs’ customer to introduce the service. Their customers can now print from their own smartphones, tablets and laptops while in the library.

Next steps for libraries

Libraries are making advances in the modernisation of services but it is important they continue to think strategically. Developing the digital offer can re-position the library from a collection of physical and virtual assets to a service that supports and enhances how people access and use information, content and services in today’s digital age. Some good starting points are to consider who currently uses the library, who could use the library more, and what are their needs? The right partners and vendors can provide the ICT expertise to make it a reality. There is a wealth of knowledge available to deliver services efficiently when the appropriate partnerships and solutions are in place.

This is an extract of an article first published in the PMLG Annual 2016.