Universal Credit and Role of the Public Library

The introduction of Universal Credit began a few years ago in selected regions as part of a phased roll out. The computer services libraries provide have been a key access point for benefit applicants. Universal Credit requires the majority of claimants to make their applications online and libraries are signposted as a location where people can use a PC to make their application.

Many claimants do not have computer facilities or broadband at home, and smartphones are not suitable for lengthy form-based applications. Libraries have supported claimants with the necessary facilities and have seen a rise in PC usage and related staff enquiries as a result.

Then 12 months ago a national rollout began of the Universal Credit ‘full service’ involving all related benefits. Last July it was announced that this rollout will complete by September 2018. At this stage it only relates to people with particular changes in circumstances who, generally speaking, need to make a new claim. From 2019 to 20221, the process of migrating all other existing claimants on legacy benefits to Universal Credit will commence. So it’s been a gradual process but one that is now expected to gain pace.

Role and impact on libraries

The important role libraries play in Universal Credit should not be underestimated. We began tracking the anticipated and emerging effects of Universal Credit on library computer use and staff at our netloan customer user groups and through our surveys a few years ago. In our whitepaper Universal Credit: Public library impact and response we saw that nearly all library authorities anticipated higher usage of public computer sessions, and with 85% expecting greater demands on library staff to handle related queries and help to get claimants online - please see the chart below. 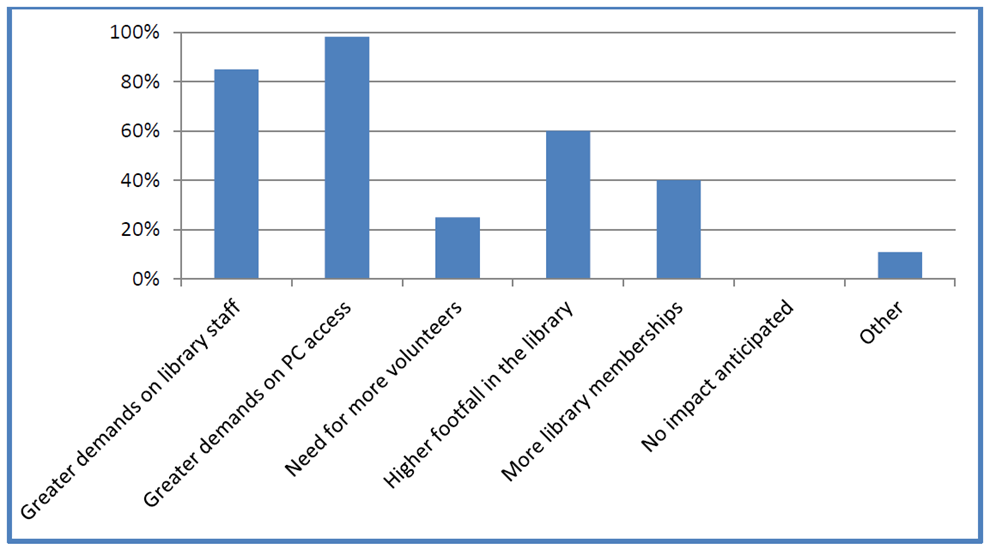 Our most recent findings from a customer survey late last year indicate that these expectations are beginning to play out. Nearly 30% of libraries were reporting increased use of PCs, with the main reasons as follows:

It’s interesting to note from this data that investment in PC facilities is paying off in greater usage at those libraries able to make this investment. The Government’s ‘digital by default’ agenda is also a major factor. There are lessons to learn from Universal Jobmatch – another online government system that launched in late 2012 and has seen Job Centres direct jobseekers to libraries for PC access and support on a regular basis.

While Universal Credit isn’t yet a top factor for PC usage increase it’s still significant. The proportion of claimants who have so far moved to Universal Credit is very small compared to the expected 8 million claimants it’s anticipated to eventually include. As the number of regions rolling out Universal Credit full service increases and finally move on to the full migration phase in 2019, the impact is likely to be substantial.

How can library staff best prepare?

From talking to our library customers and supporting a workshop at a Society of Chief Librarians (SCL) seminar we’ve gained some important insights. Staff training is a priority for many libraries, with 60% making or planning this provision. Local Job Centre staff are seen as a potential source of this training and this has already proved useful during some of the earlier regional pilots. Many libraries are already working in partnership with DWP (Department of Work and Pensions) to deliver training or job clubs in connection with Universal Jobmatch.

Some have set up reciprocal arrangements in preparation for Universal Credit: libraries train or assist claimants, DWP train librarians. Some arrangements also involve Job Centre staff helping onsite at libraries. It has to be noted though that the outcomes and performance of these local initiatives has varied with much dependent on relationship building, senior management awareness and leadership. This has prompted support for a wider more coordinated approach that would support libraries in responding to the expected increase in demand on their services. There’s an opportunity to reach an agreed definition on the role of libraries around Universal Credit, and a practical expectation of the service libraries can offer.

When it comes to demands for PC session time, our netloan customers are taking various approaches to dealing with this rising need, from dedicating PCs to Universal Credit use only, to offering longer sessions for this purpose. Universal Credit applications can take over an hour. As library computer sessions are often a standard hour long, there’s the risk of being logged out before completing an application. For some libraries, shorter opening hours are impacting on whether they will be able to provide sufficient sessions to meet the increasing demand.

As the Universal Credit roll out has progressed, there have been concerns over PC provision generally, with funding for updating systems and hardware often in short supply. Many of our library customers upgraded their PC provision in 2014/15, with a move away from the outdated Windows XP operating system. There is still room for improvement though with many libraries needing more robust, modern terminals to be able to provide a good level of service.

We’ve seen that libraries in regions that are beginning or progressing their move to Universal Credit can learn much from the experience of those who have already been supporting applicants. Of course, making sure library technology and hardware can keep pace with the Government’s digital agenda is only part of the challenge. Support of staff and volunteers is also essential for assisting claimants. We will continue to share insights gleaned from our library customers to help with this, and will retain Universal Credit as a key topic for discussion at our netloan user groups so attendees can continue to share their experiences.

1: Timetable of Universal Credit roll out to existing benefit claimants now anticipated to conclude in December 2023

2: In the netloan customer survey results 2018, Universal Credit was recorded as the biggest driver of increased PC usage in public libraries. In 2019, it was one of the main reasons that 80% of libraries were seeing constant or increased request for help with digital skills