This is the fourth instalment exploring major library projects involving our netloan PC booking software customers. Following these projects, use of library services has increased in response to the modern and inviting facilities provided. They have also created some inspiring new urban landmarks. In each case, the digital offer provided by these libraries is a core part of services – an essential element that we are committed to supporting and developing through our netloan portfolio.

In 2016, South Tyneside opened a new library and digital media centre, The Word, in South Shields as part of the town’s £100m regeneration. The circular building, with its logo incorporating a wireless symbol, has been named to reflect the evolution of the written word in its many modern day forms (see top of page, photo credit: Julia Chandler/Libraries Taskforce).

As well as providing a suite of public access computers controlled by netloan PC booking, the library offers ‘OpenZone’ digital classrooms, a media studio and FabLab, to support schools in a range of projects including film-making, animation and coding. It has since reported that its People’s Network computer logins have more than doubled in the first year of opening. There’s also been 176% increase in the number of new library members. The Word continues to develop its services with a new events space, ‘The Round’ being built in the rooftop level.

Last year, The Word won the national Community Benefit award in the annual RICS (Royal Institution of Chartered Surveyors) Awards. It was praised for providing what judges described as “a truly inspiring and interactive community-led centre with a 21st century library and exemplary facilities”. 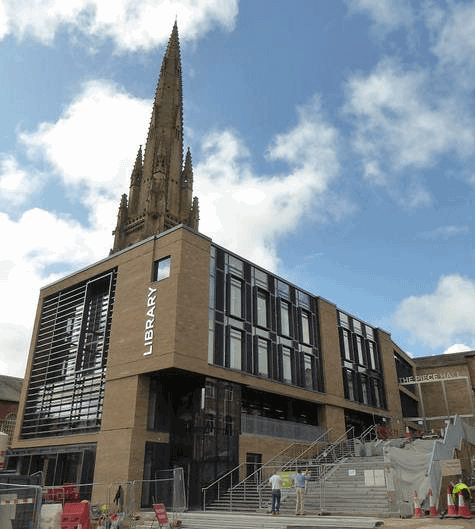 Calderdale Libraries opened a new £9 million central library in Halifax last September. Built around a Victorian church ruin, the library includes the former church’s spire - one of the highest in England when still an active church.

With a combination of new and old architectural features, it’s provided the town with a new striking landmark as part of its cultural regeneration, and of course, an engaging new library.

During its first couple of months, there’s been a 50% increase in children’s visits and a 55% increase in new members. It’s also brought back a number of lapsed members returning to reactivate their accounts, with a 28% increase in this activity.

A Lorensbergs customer since 2003, Calderdale rolled out netloan PC booking as its session management solution at the new library, to maintain fair access and reporting on its resources. We are delighted that this will be our venue for the 2018 netloan user group for customers in midlands and northern regions, taking place on 21 November. Further user group dates and locations will be announced shortly!

Trafford’s Limelight Centre opened last November (2017) to provide residents with a one stop shop for accessing a variety of services including the local council’s services; Trafford Housing Trust, Old Trafford Library, two GP Surgeries, a pharmacy, an opticians, a nursery, a hairdressers and a café.

It uses netloan PC booking and print management software to provide 10 bookable public use computers with Office software and free internet browser access. The centre’s reception has a further four computer stations controlled by netloan for which staff can support user access and take payment for printing. The netloan charging module is used for taking payment for PC use beyond users’ initial half hour sessions. Since opening, the centre has met customer demand for computer access by increasing provision to a total of 17 terminals.

This blog post concludes our current major library projects series. For a summary of this work, please download the briefing available here.