If somebody had asked me how I had spent last Monday afternoon, they would have been regaled the story of my Virtual Reality experience at my local Library. Queued up surrounded by excitable children, I anxiously waited for my turn to use their new VR headset. While some children already seemed to be seasoned professionals with this kind of gadget, many had never had the opportunity to use one before, myself included. It certainly proved a thrilling experience to meet and stroke a virtual dinosaur in what is usually such a familiar setting!

At Lorensbergs we’re always excited to see the new ways libraries are using their ICT resources to engage their communities. The event I described is the latest in Hertfordshire Libraries’ ‘Creator space: out of the box’ series. This technology event includes fun and innovative ways to teach children in the entertaining and relaxed environment of their library.

Four stations offered different types of activities to try your hand at. I and the younger event goers were all spoilt for choice, learning new skills as we got involved. With children around explaining to me their theories on how each gadget worked, I was reminded of how technology had progressed, especially in terms of education. Here was a large group of animated children during their half term week, in a local library, learning to code. It’s part of Hertfordshire’s Libraries Inspired initiative to involve newer cutting edge technologies, so the public can gain access to gadgets that most would not have at home.

Similar events have been successful in Hoddesdon and St Albans and have engaged customers of all ages into their eighties, as one commented: ‘Why did I have to wait until I am 83 to witness this? Good fun and clever technology’. Meanwhile, older children and teens have been keen to participate and compete, with a Coaster Combat scoreboard proving especially popular.

Parents in attendance were also very supportive, with one commenting: “Very engaging activities for the kids in a fun way. Coding is so important for their future. Very appreciative for them to learn.”

Such feedback is testament to how libraries are evolving in how they provide for local communities. Building on the key infrastructure of public computers and Wi-Fi, they’re able to gather together young and old alike to partake in fun, cutting edge games using new technologies.

With CreatorSpaces at both Watford and Hemel Hempstead libraries in Herts, the ‘out of the box’ events enable greater numbers of library customers to sample the new resources by attending local branch events. It also encourages greater numbers to visit the main CreatorSpaces and enjoy what’s on offer. Speaking to a member of Hertfordshire Libraries' staff, I asked about the value of investing in resources such as VR headsets. I was told it’s an investment that’s really paying off, enabling people to access a new technology while demonstrating an enthralling new aspect to library services. This effectively futureproofs how libraries are used and perceived, offering a valuable starting point for new skills development. It’s difficult to estimate just how important this is to both libraries and their customers. 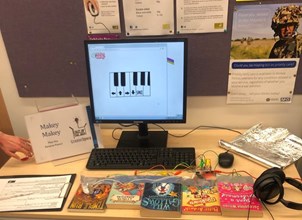 Above: Make Makey on a People's Network PC; enthusiastic feedback from some of the younger participants.

Personally I was delighted to see the Makey Makey piano, hooked up to a People’s Network PC, with children’s books for keys (an innovation more commonly referred to as the banana piano, with fruit often being the objects of choice to replace the computer keyboard). It’s common knowledge that library PC’s are used by the public every single day, whether for critical services, work or leisure. But to see a People’s Network computer being transformed into a virtual piano for children, really highlighted how libraries can transport young people’s imaginations in new directions.

A big thank you to all at Hertfordshire Libraries for putting on such a fun and informative event - we hope to attend more in the future (just try keeping me away!)