At Staffordshire Libraries, the People’s Network (PN) roll out of library computers was a massive project. It modernised more than just the facilities in libraries, but their public image too. Simon Warren, Client Services Team Leader, recollects how his team rolled out 640 PCs in under a year to meet the launch deadline.

Getting started in the early days

“There was a big buzz around libraries and the funding that they’d won. It was a massive change in what they were for and how they were perceived. We put in our bid for funding in July 2001. We had just a handful of PCs at that time, off network on dial-up connection, across a few library branches, typically used for writing CVs using Microsoft Word and then printing off."

The PN project involved improving the overall infrastructure of the network at Staffordshire and installing broadband. Once the PCs themselves were procured they were individually configured and rolled out.

“It impacted the layout of libraries, as staff figured out where to put all the new terminals – some intense floor planning was required! We also needed to work out how to keep them secure, both technically with the right applications in place, and physically to keep hold of the expensive new hardware. Unfortunately there were some early thefts to deal with. They were bolted to the desks, but this didn’t deter some thieves from breaking in at night and stealing them using a circular saw!”

Simon describes that there were some early delays in the PN service taking off but that it soon proved popular.

“Initially the take up was slow due to low key publicity. Too much too soon would have overwhelmed library staff. But once word got round that you could go to your library and access computers with broadband, it was very appealing. Many people were still on dial up at home even if they did have a PC. It was quite revolutionary!”

Library staff and the People’s Network

“Staff training was a big issue, with many libraries not having any PCs previously at all. Their job role changed really overnight. They now needed some technical ability to be able to help users. Training was mainly provided by the library service staff rather than the councils IT department, to get them up to speed, but it was a mammoth task and took longer than the PC roll out itself.”

“With the increase from a couple of PCs to as many as 40 per branch, staff were unable to cope with ensuring fair access. Some people logged in and stayed on the computers all day and we needed to install netloan, a PC booking software to manage PC session length. It sorted out the problem right away though.”

There were also some unexpected upsides, supporting library staff in their roles:

“Automatic PC logouts timed to 10 minutes before lights out is an invaluable method encouraging customers to leave at closing time. It’s very effective indeed! At last we were able to close our libraries on time. And customers accept it as long as they’re given enough notice and polite warnings on their screens beforehand.

“Print payments had been made on an honesty basis, and only a fraction of the amount due was ever received. We didn’t realise at the time how frequently this happened. It was only with netloan print payment and release that we saw this revenue really begin to flow. It was a real revelation! Overnight, netloan radically changed libraries.”

Growing reliance on the PN

“Over time, we’ve expanded our role and people are increasingly being directed by other agencies to the library, such as jobseekers from the Department of Work and Pensions. There’s definitely the expectation now that the library is where you go if you want free internet access, or if you need support in filling out online forms.

“Despite the increase in home computers and broadband, there remains the need for IT access within libraries, and people can feel let down if the library PCs aren’t working. We hear from our libraries that if funding was available, they would happily accommodate more PCs. Budget pressures have meant we’ve had to look at reducing the number of Library PCs while demand has been steadily growing. Consequently we have had to be increasingly efficient with the budget we have.”

At Stafford Library the Library Service has invested in an innovation suite which is a great example of how good facilities attract a wide audience. 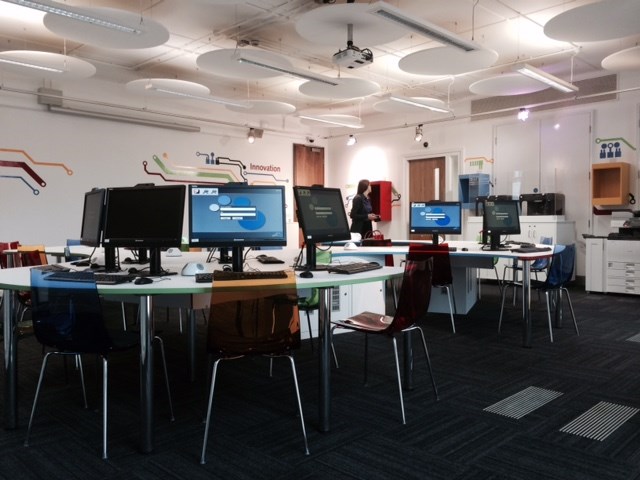 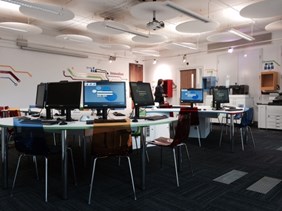 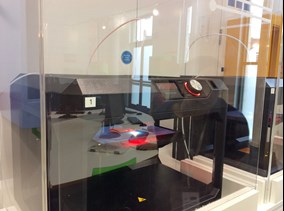 “It’s got up-to-date computers, coding products and clubs, netloan Wi-Fi printing and 3D modelling. It encourages youngsters to come in and get into programing. A teenage section with touchscreen PCs enable users to have space for three at a time. The seating is designed in this way, so users can interact with each other while using these screens, but we’ve found that they’re not only popular with teenagers, but people of all ages! It’s been very interesting to see.

“Wi-Fi access is also relatively new. All Staffordshire Libraries now have Wi-Fi and a growing number now have Netloan wireless printing so users can bring in their own devices, access the internet and print directly, while enjoying the libraries’ great facilities and technology.

“I think there will always be a demand for fixed PCs, a lot of people are familiar with that technology now, but these additional services have attracted a wider audience. It’s a big win to enable people while out and about to pop in and print off their documents. We now have 12 of our libraries using Wi-Fi print.

“We’ve put a number of touchscreen devices in at Stafford Library in addition to the regular PCs. Microsoft tablets, and large (32” portrait) wall mounted touchscreens which enable access to the online library catalogue, local information, NHS choices, trading standards, bus timetables etc. That information has always been there, but now the way we’ve done it has made it much more accessible. Staff have been encouraged to work with these products, and then their enthusiasm comes across to users.”

There are countless situations where people are relying on using a library PC and can be quite desperate in getting something done. “One lady was on her way to an interview with her paperwork and CV. But it got wet and was impossible to read after she dropped it! She had to get it printed off again and came into the library where she was quickly able to do this by accessing her email from one of the machines here. Unfortunately, we never heard if she got the job!

“And quite frequently, people rely on us for printing travel documents, for example, when their printer cartridge runs out unexpectedly and their flight is due the next morning.

“Our 3D printer has also proved popular for project work. Very soon after we first introduced this facility, a girl used it to produce a pyramid for her school project on Egypt, which really made a big difference to the standard of work she was able to hand in.”

Summarising on the importance of the PN, Simon concludes;

“If this resource was to disappear overnight there would be public outcry. I know that simply from the few times we’ve had network issues and the machines haven’t been available. There’s an expectation now that we provide these facilities and they are always available for people to use.”

With thanks to Simon Warren at Staffordshire Libraries for kindly participating in this People's Network 20th Anniversary case study.